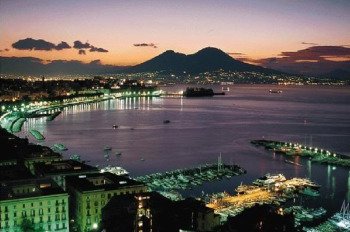 Its vast artistic and architectonic patrimonyis protected and its historical center is recognized by UNESCO as World Heritage Site.

An important and famous ancient site nearby is Pompeii, buried by an eruption of Vesuvio in 79AD. Excavations of the site have been ongoing for a few hundred years so there is lots to see and you'll be doing a lot of walking. The port of Naples is one of the largest ports in Italy and the most important in southern Italy. Another interesting place to visit is the Vesuvius volcanoes.

Castel Nuovo, better known as Maschio Angioino, with different architectural lines, well integrated with each other, recalling the dual role of this fortress-palace building during the period of the Angevins and the Aragonese. Beautiful is the Arc de Triomphe commissioned by King Alfonso I of Aragon and designed by Pietro de Martino and Francesco Laurana. On a small island, connected by a bridge to the nearby mainland, is the monumental Castello dell'Ovo, with a wonderful view over the bay.

Perched on the central district of Vomero is Castel Sant 'Elmo, from where you can admire the great thoroughfare, popularly known as "spaccanapoli", which divides the city into two parts.
And finally, Castel Capuano, built as a fortress and then embellished with architectural changes that transformed it into a noble residence. Nearby, Porta Capuana, main entrance to the city in the past, delineated by a fine marble arch.

There are countless churches across the city. The Cathedral, superimposed on existing buildings, some of which are incorporated in the current structure, has undergone radical changes, especially in the outer part, to remedy the serious damage caused by earthquakes. Enrico Alvino was, in 1800, to impart vertical thrust which characterizes today's facade, with pinnacles, spiers and shrines built around works that survived the earthquake. The interior has a Latin cross plan with three naves divided by two long rows of pillars, home to the famous Chapel of the Treasure of San Gennaro, in addition to two cruets containing the blood of the saint holds wonderful masterpieces made from precious metals.

Another important point related to the Saint of Naples Italy, are the Catacombs of San Gennaro with frescoes, mosaics and artifacts of great value.
A set of different architectural styles built in different eras draw the imposing Basilica of San Lorenzo Maggiore, built on the remains of structures greek-roman, excavated and can be visited through access located in the cloister. Along the route Spaccanapoli, is the Church of Gesù Nuovo, with a particular facade recovered from a fifteenth-century mansion, and a triumph of marble decorations and paintings on the inside.

The Monastery of Santa Chiara, with simple lines and sober typical of Franciscan churches, as well as the royal tombs, keeps the characteristic cloister of the Poor Clares with an unusual decoration, completely made of colorful tiles depicting the colors of this land. As quiet as a cathedral and rich in works of art, the Church of San Domenico Maggiore is another interesting example of the particular process of formation of the artistic and cultural heritage of Naples Italy.

Back to Italy Cities